The Vertical Speed Indicator (VSI) displays the rate of climb or descent measured in thousands of feet per minute. It is considered to be a secondary instrument because it can generally be inferred from the altimeter. It is also considered to be unreliable in many circumstances because it has a delay.

How to read vertical speed

Each digit on the indicator represents a thousand feet. However, with the performance of light aircraft, the vertical speed is expressed in hundreds of feet, using the tick marks along the edge of the gauge. So if the needle was pointing downwards at the .5 marking it would indicate a descent of 500 feet per minute.

500 feet per minute simply means that the plane is descending 500 feet every minute. This allows for some quick and simple math for climbs and descents.

If you are descending from 7500 feet to a pattern altitude of 1500 feet then you need to descend 6000 feet, which will take 12 minutes at 500 feet per minute. This type of calculation doesn’t always work in a climb as the aircraft’s performance may prevent you from maintaining your desired climb rate.

The VSI is unreliable

A significant delay occurs when the aircraft is changing it’s vertical speed, so the indicator cannot be used when your climb or descent rate is not constant. If you are attempting to maintain a level altitude using the VSI you will end up chasing your altitude up and down because you will not see your corrections until after they have taken effect.

This is why you should check if you are climbing or descending by looking at the altimeter and seeing if it is moving or not.

While unreliable, the gauge can still be used to maintain a constant climb or descent rate, while making small changes and waiting for them to take effect after 2 or 3 seconds.

How does the vertical speed indicator work? 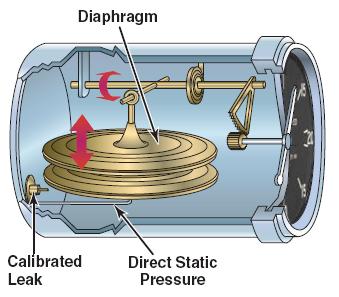 As the aircraft levels off the static pressure from the controlled leak will catch up to the pressure in the diaphragm and the needle will indicate level flight.